No Man's Sky
Don your space suit and prepare to embark on a journey through an infinite procedurally generated universe in action-adventure No Man's Sky. Get your Steam PC key now!

There's a plethora of worlds to discover and explore in No Man's Sky, and many of these host some form of threat on the surface - but nothing compared to the horrors that await in the latest update for the exploration survival game.

No Man's Sky Desolation, which launched today (July 16th) sees Travellers embarking on missions to uncover unique mysterious abandoned freighters rich with loot, but dark and dangerous. Desolation is part of Update 2.6 for Hello Games' hit title on console and PC, and here we'll be taking a look at what's included within this update.

Fight or flight... or freighter

A key feature in the No Man's Sky Desolation update is the addition of haunted procedurally-generated derelict freighters, in which players will scavenge through the wreckage to find valuable goods. Derelicts are found all across space, but Travellers seeking salvage opportunities can acquire specific coordinates from a local scrap dealer... for the right price.

No two interiors the same, and the only way to learn the fate of the crew is to step through the airlock door and find out for yourself!

Each derelict freighter also has a unique story to tell. You'll be able to uncover hints about each crew member's fate by retrieving ship logs and personal effects, and ultimately gain access to the captain’s log for insight into the vessel’s final hours.

Discovering freighters and obtaining rare treasures is not always that simple. Some of these freighters have been infested with a sinister alien infestations. If you head inside, be sure not to disturb their nests!

Some of these small alien lifeforms are nimble and can fire a projectile substance from their mouths, while others pose the same stinging threat as a space-like jellyfish. If all hell breaks loose, don't feel too bad if you have to blast your way out. 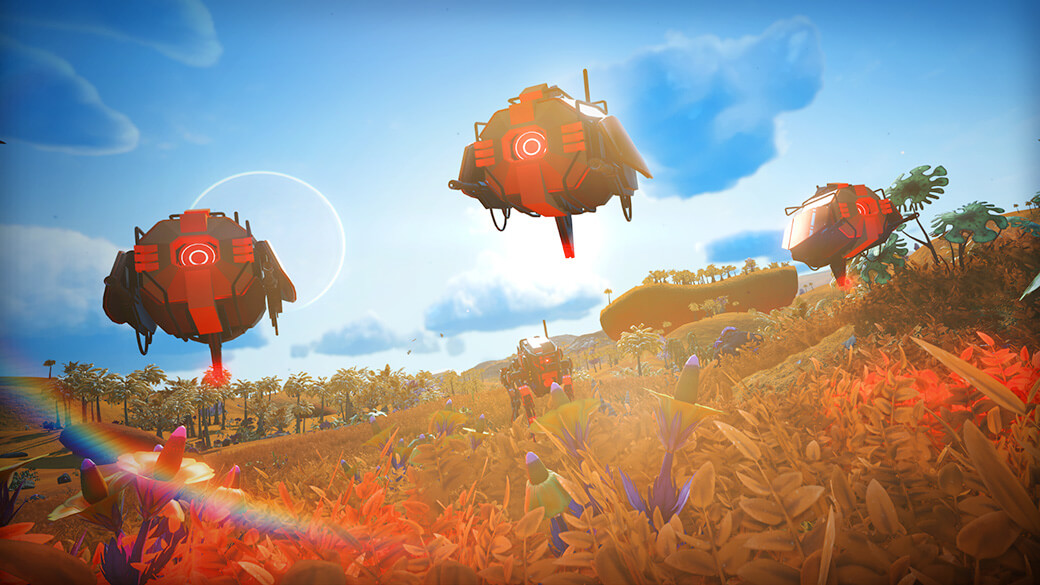 Aside from dangerous freighters to explore, Hello Games has also given the overall gameplay a few tweaks. A new technique for bloom lighting has been implemented, resulting in enhanced colour vibrancy and a softer ambience around light sources - and the intensity and quality of lens flare has been revisited, and the sun is now an additional source of lens flare.

Lens dust is much more evident, and the halo effect surrounding bright light sources is subtly animated. New volumetric light sources have been added, and the Exosuit torch beam is now textured with realistic lens artefacts, enhancing the atmosphere of derelict freighters.

The Desolation update has also seen improvements to the game's combat system, as Multi-Tool weapons have been rebalanced with a focus on a faster-paced, more dynamic, and more satisfying combat experience. Sentinel health and weapons have been tweaked, and combat reinforcements now spawn in greater numbers.

In addition, weapon visuals including crosshairs, muzzle flash, camera shake and projectile visibility have all been improved.

Extracting upgrades from derelict freighters will give you personalised, unique items to both upgrade your freighter and make it reflect the history of ships you’ve scavenged. As well as making improvements to your capital ships’ warp drive, Desolation gives you new fleet upgrades that can be found and fitted to your freighter - these boosts will permanently improve the abilities of your frigates as they explore the universe.

Also, freighter upgrades are no longer restricted to the technology inventory, and may be installed in the general freighter inventory. You can salvage Auto-Expanding Freighter Modules from derelicts and graft additional inventory space onto your capital ship’s cargo hold.

Plus, you can now change the color of your capital ship from the Upgrade Control terminal on the freighter bridge. Freighter storage boxes can also now be accessed directly from the inventory screen tabs, and Teleport Modules may now be built aboard freighters, which gives you direct teleportation between bases, space stations and your ship.

Encounters of the space kind

The Space Encounter Guide update means mining asteroids in space now have the chance to reveal an Anomaly Detection Beacon. These single-use devices can probe local space and detect nearby anomalous objects for investigation and potential rewards.

Onto the Nexus one

Desolation will also bring you new Nexus Missions, with more varieties of multiplayer mission available at the Nexus on the Space Anomaly. You can team up with fellow Travellers to survey the life and geography of exotic planets, or assist lost souls whose starships have met an unfortunate fate.

From
£0.85
Platinum Collection - Build your own Bundle (August)
View

UNCHARTED: Legacy of Thieves Collection — New to UNCHARTED? This is what you need to know!