Rated 'EXCELLENT' Based on 66,915 reviews
14 Day Money Back Guarantee on this product** 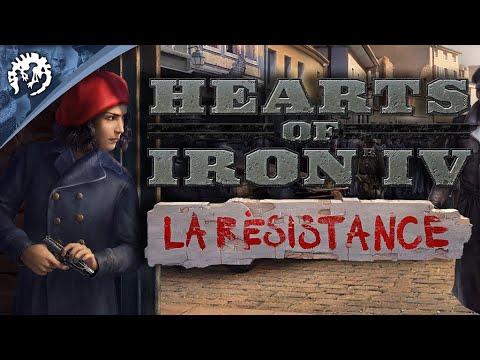 The enemy has installed a puppet government in an allied nation. Brave individuals promise to fight against their occupiers and oppressors. Use your agile espionage skills to support the work of La Résistance.

La Résistance adds secret agents, espionage missions and new options for resistance movements to Hearts of Iron IV, the popular grand strategy wargame from Paradox Development Studio. Send agents into dangerous territory to decipher enemy secrets or prepare the ground for your invasion by propping up collaborators who will be happy for any taste of power.

Features of Hearts of Iron IV: La Résistance include:

• New Focus Trees for France: New National Focuses for Free France and the Vichy Regime, as well as an option for conservatives to restore the old French Monarchy.

• More in Depth Spanish Campaign: New National Focuses for Republican and Nationalist Spain, as well as an expanded Spanish Civil War that can spiral into a wider conflict..

• Espionage: Use you Intelligence Agency to train spies to specialize in certain types of information warfare and develop passive resistance to enemy espionage, then send them on special operations.

• Support Resistance: Use your agents to assist allied resistance movements, giving them what they need to damage the enemy.

• Collaboration Governments: Use your agents to prepare the ground for collaborators to fill the void once you’ve conquered your target.

Hearts of Iron IV: Together for Victory DLC

78
Critic Review Score
(4 Reviews)
Reviews provided by OpenCritic
PC Invasion
8 / 10
"La Resistance has almost everything you could ever want out of a Hearts of Iron IV expansion. Numerous espionage and spying mechanics will keep you interested without getting...
GameWatcher
Marcello Perricone
7.5 / 10
"A bit of an odd beast that isn't as major as previous DLC, but still fills an important gap in WWII history."
TechRaptor
Alex Verdini
8 / 10
"Hearts of Iron IV: La Resistance is the newest DLC that adds intelligence, operations, and spies that adds meaningful mechanics to the base game."
Reviews provided by OpenCritic
Redeem on Steam
This game requires a Steam account to play.
Instant delivery
Your purchased keys will be available immediately.*
Officially licensed
All our keys are sourced direct from the game's official publisher.

£15.49
Activates in United Kingdom
Downloadable Content. This content requires Hearts of Iron IV: Cadet Edition on the same platform in order to play
Get a coupon for ...
5% Offyour next order
when you purchase this product
Exclusions apply. The coupon will be emailed to you.
Redeem on Steam
This game requires a Steam account to play.
Instant delivery
Your purchased keys will be available immediately.*
Officially licensed
All our keys are sourced direct from the game's official publisher.