Rated 'EXCELLENT' Based on 69,140 reviews
14 Day Money Back Guarantee on this product**

Northgard - Himminbrjotir, Clan of the Ox 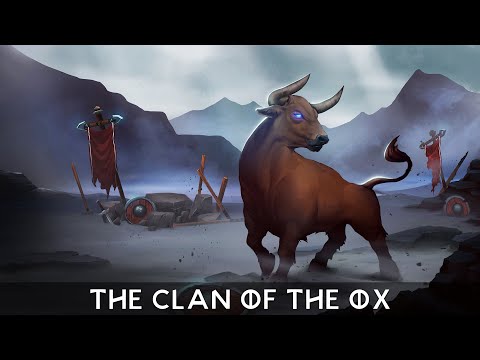 Led by Torfin, an ancient leader who returned to help his progeny, it is known for its tremendous might and unrelenting devotion to its ancestors. While they may not be the fastest starters, once they've gained some momentum, they can crush anyone and anything in their way.

Your Warchief is the powerful Torfin.

Torfin can find Ancestral Equipment from Ancient Battlegrounds and equip them to become even stronger.

Your units are tougher, larger and eat 10% more than the other clans.

Your units have a +15% attack power and defence bonus.

Specialized civilian units have a +30% base production bonus, except loremasters.

Buildings can hold only one unit, and houses hold less people.

An imposing and unpredictable figure, with unmatched strength and an arsenal of Ancestral Equipment that served only to enhance his already devastating array of attacks, Torfin was considered by those who had not had the misfortune of crossing his path in battle to be an embodiment of tall tales and hearsay.

Now, having led the Ox Clan to becoming one of the most feared and respected in all of Northgard, there are few who question his legitimacy as he lies dormant, awaiting the day that his people call upon him and his immense power once more.

Northgard - Ratatoskr, Clan of the Squirrel

Northgard - Nidhogg, Clan of the Dragon

Northgard - Svardilfari, Clan of the Horse

Northgard - Sváfnir, Clan of the Snake

Northgard - Lyngbakr, Clan of the Kraken

£3.99
Redeem on Steam
This dlc requires a Steam account to play.
Instant delivery
Your purchased keys will be available immediately.*
Officially licensed
All our keys are sourced direct from the game's official publisher.

£3.99
Activates in United Kingdom
Downloadable Content. This content requires Northgard on the same platform in order to play
Get a coupon for ...
5% Offyour next order
when you purchase this product
Exclusions apply. The coupon will be emailed to you.
Redeem on Steam
This dlc requires a Steam account to play.
Instant delivery
Your purchased keys will be available immediately.*
Officially licensed
All our keys are sourced direct from the game's official publisher.