Rated 'EXCELLENT' Based on 69,122 reviews
14 Day Money Back Guarantee on this product** 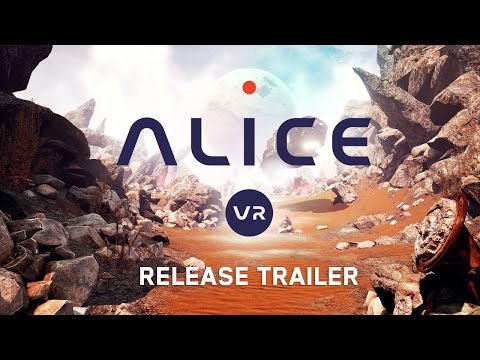 The wait is over! It's been a long time since we started working on Alice VR and now we can finally share it with the whole world! Without further ado, we invite you to the wonderful science fiction world inspired by the adventures of Alice in Wonderland and designed specifically with VR in mind. You can now play Alice VR!

Also, don't forget the extras you'll get with the game:

So, see you on Speculo! Just jump down the rabbit hole!

Hello All!
We’re proud to announce the release date of Alice VR! Everyone will be able to visit the alien planet Speculo on Thursday, October 27th 2016 and find the truth behind the disappearance of its inhabitants.

As a huge thank you to everyone supporting our indie efforts, we have some really cool additional content!

With the purchase of Alice VR you’ll receive:

BUT THAT’S NOT ALL!

If you happen to be a linguistic enthusiast, or just like playing games in your mother tongue, we have some more cool news for you! Alice VR from day one will be available in 6 languages: English, Polish, German, French, Spanish, and Russian with voices recorded in English and Polish.
We’d love to localize Alice VR into all 6909 languages that us humans speak on this rock, but it wouldn’t be realistic. On Speculo they only use 6, you know. Or thereabouts.

Alice VR is a story-driven exploration game rich with puzzles and designed to be a singular VR adventure. Game is inspired by the famous Lewis Carroll's novel "Alice's Adventures in Wonderland", taking its characters and themes to a new science-fiction setting. Enjoy beautiful graphics, atmospheric, electronic soundtrack and lose yourself in the world of Alice VR.

An unexpected malfunction forces your ship’s AI to wake you from the cryo sleep. You have to make an emergency landing on the nearby planet. Your goal there is simple: find enough fuel to escape. This straightforward task gets complicated when you realize that all of the planet’s citizens had disappeared in mysterious circumstances.

Alice VR is a fresh take on the classic adventures of Alice in Wonderland. During your playthrough you'll meet familiar characters such as Cheshire Cat or Mad Hatter, but the unique sci-fi setting will make every encounter a big surprise.

Will you discover the planet's secret? Are you ready to face the challenges ahead? Follow the white rabbit into the unknown - the future is in your hands.

Alice VR works on Oculus Rift, HTC Vive and is also compatible with Razer OSVR. Traditional controllers are supported on Oculus, while both them and motion controllers work on Vive.

The game is designed to be the most comfortable VR experience possible. After a lot of research and discussions with gamers, we've learned how to make the game enjoyable even for players new to VR. We want you to feel relaxed through your entire playthrough.

Alice VR also works on a regular monitor, without a VR headset.

With the game you’ll receive its original, atmospheric soundtrack! Enjoy the full, electronic sound composed by EON Sounds. It makes for an incredible listening both on headphones and big speakers, each time taking you back to the world of Alice VR!

DIGITAL ARTBOOK WITH CONCEPT GRAPHICS AND NOTES FROM THE DEVELOPERS

Over 40 pages of this digital artbook are filled with concept arts from the game, showing the beautiful and haunting scenery of planet Speculo and its only city: Mirabillis.
Each page also contains notes from the developers, telling about their inspirations and the work behind Alice VR.

A SET OF UNIQUE WALLPAPERS CREATED BY THE DEVELOPERS

Marvel at the high-resolution, picturesque vistas of Speculo sitting right there on your desktop! Every graphic was specially created by the developers to showcase the beauty of this alien planet and the foreboding atmosphere of its lonely city.

Listen to what the game’s creators have to say about designing a game specifically for VR. What challenges laid before them and where did they drew their inspiration from? This video materials show what was going on behind the scenes of Alice VR.

£5.87
£6.99
-16%
Activates in United Kingdom
Get a coupon for ...
5% Offyour next order
when you purchase this product
Exclusions apply. The coupon will be emailed to you.
Redeem on Steam
This game requires a Steam account to play.
Instant delivery
Your purchased keys will be available immediately.*
Officially licensed
All our keys are sourced direct from the game's official publisher.