Rated 'EXCELLENT' Based on 67,380 reviews
14 Day Money Back Guarantee on this product** 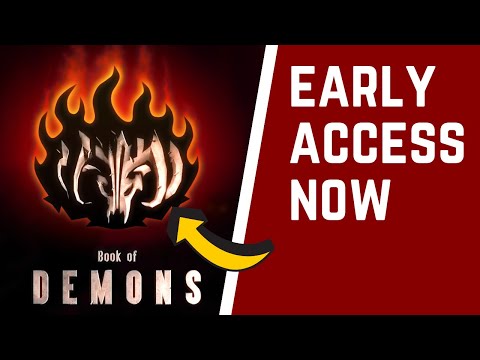 Witness hack and slash distilled to its purest form with Book of Demons. With this Steam key, gamers will embark on many fantasy quests, with everything from slaying the armies of darkness in dungeons below the Old Cathedral to saving the terror-stricken Paperverse from the clutches of the Archdemon himself.

Relive a classic universal tale of good and evil, and saving the world from total destruction and ultimate devilry!

QUESTS DONE YOUR WAY
Whether it's a quick trip or hours of gaming, you can set the length of each quest with the game's Flexiscope system. Flexiscope learns from the player's time in the game and gives you the best experience, making Book of Demons the first truly accessible hack and slash.

BUILD YOUR OWN DECK
Collect powerful skill cards and create devastatingly powerful packs to challenge different enemies types. The efficiency of each card will greatly depend on the situation you're in, so players must be on their toes and make constant adjustments to be victorious.

NEW ADVENTURES
Never explore the same dungeon twice with procedurally generated levels. With over 70 kinds of creatures waiting to be slain, players will go up against scorpions, snake archers, mad goat men and many more.

WANT A CHALLENGE?
Defeated the Archdemon as a Warrior? Master the campaign with the other classes (Rogue and Mage) and revisit your favorite quests in Freeplay mode. Or, players can rise to the challenge and explore the dungeons on higher difficulty levels - including 'Massacre'.

YOUR OFFICIAL BOOK OF DEMONS STEAM KEY GIVES YOU:

Fanatical about: Book of Demons

One thing that makes this isometric adventure card game different from the others is its artistic paperverse appearance. Players will be able to collect a vast array of cards to battle enemies in procedurally generated levels. The neat Flexiscope system will also be appealing to gamers who want to have a quick play.

76
Critic Review Score
(33 Reviews)
Reviews provided by OpenCritic
Wccftech
Nathan Birch
9 / 10
"Book of Demons is rather brilliant in its own small way. It strips the Diablo formula to its bare essentials without sacrificing any of its appeal. In some ways, it even...
RPG Fan
Bob Richardson
75%
"The busiest gamers who can't dive deep may find a pearl in shallow waters. "
GamingTrend
Bryan Lawver
85 / 100
"Book of Demons introduces a unique card-based skill system and a sense of humor to the stuck-in-its-ways ARPG genre. It has plenty of tricks in its dungeon to keep you on your...
Reviews provided by OpenCritic
Redeem on Steam
This game requires a Steam account to play.
Instant delivery
Your purchased keys will be available immediately.*
Officially licensed
All our keys are sourced direct from the game's official publisher.

£14.34
£19.99
-28%
Activates in United Kingdom
Get a coupon for ...
5% Offyour next order
when you purchase this product
Exclusions apply. The coupon will be emailed to you.
Redeem on Steam
This game requires a Steam account to play.
Instant delivery
Your purchased keys will be available immediately.*
Officially licensed
All our keys are sourced direct from the game's official publisher.