Rated 'EXCELLENT' Based on 70,000 reviews
14 Day Money Back Guarantee on this product** 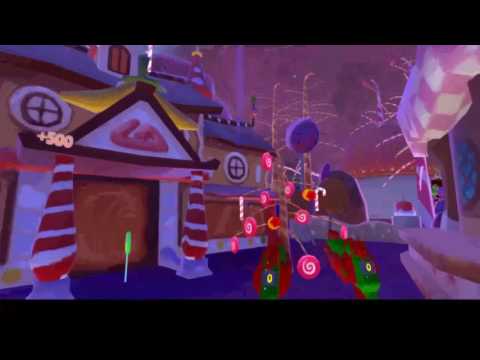 Requires a HTC: VIVE or Oculus Rift VR headset in order to play

Magical Candy Kingdom is a fun candy shooting game for all ages!

Once upon a time in a magical Candy kingdom, there was a king named King Candy and he had so many candies that his whole kingdom was enjoying them every day!
On a glorious day, his army of candy cookies opened the door for a cute little fairy, who was lost and desperate to find a new place that she could call home.

After hearing all the stories that the fairy was sharing with him, he felt that he needed to help her out. Without further thinking he offered the fairy to stay in his kingdom as long as she wanted and enjoy his candies.

At this point, he didn’t knew that the cute little fairy was actually a witch in disguise, wanting to take all his candy and his kingdom.

The king was so interested in the fairy, that he invited her daily to his castle, to hear all the stories, which the fairy could tell him.

He didn’t know that spending time with the fairy caused him to fall into the grip of the witch, who was secretly putting a spell on him.

Days and days passed and step by step the king lost his interest in the candies and his kingdom. He couldn’t and wouldn’t care any more.
Once the kings mind was completely in control of the fairy, the witch could finally show her true form. He wouldn’t see or wouldn’t care…

Under the control of the witch, he did everything for her.
King Candy commanded his army of cookies to destroy anyone who would enter his kingdom from then on.
She even commanded him to switch all the nice candy with enchanted candies, so people who would eat them would be instantly under the control of the witch…
His kingdom is lost. The Candy kingdom needs a new king…

Will you be the new king of Candy Kingdom , destroy the enchanted candies and defeat the army of cookies?

Try to complete all levels to claim the King trophy!

important note :
- When you start, don't forget to pickup the guns inside the train
- If you unlocked auto-shooting, you can select the level on the guns by pressing left/right on each controllers track pad
- Should the scaling not be correct, change to the correct scaling level by pressing +/- keys on the keypad.