Rated 'EXCELLENT' Based on 66,912 reviews
14 Day Money Back Guarantee on this product** 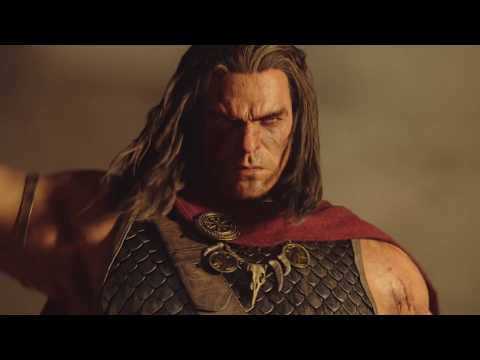 Enter the first-ever strategy game to feature within the Conan the Barbarian universe with survival RTS Conan Unconquered - from veteran developers behind Star Wars: Empire at War and Command & Conquer.

With this Steam PC key, you must build your stronghold and assemble an army capable of withstanding the savage hordes of Hyboria in real-time strategy warfare.

STAND YOUR GROUND
Take on wave after wave of increasingly difficult enemies that hurtle towards your settlement and attempt to bang down the gates in brutal, savage battles. Prepare for anything and everything as foot soldiers, giant snakes and scorpions, necromancers and flying demons test your defensive capabilities.

BECOME THE ULTIMATE LEADER
Manage resources such as food, gold, wood, and iron to strengthen your stronghold and its people; research new technologies to advance your defenses, and recruit eager warriors for your ever-growing army to withstand countless foes.

Construct a variety of buildings, from housing and temples to military barracks, and build sturdy defensive walls around your stronghold while equipping them with traps such as oil cauldrons for unsuspecting attackers. Gain access to advance troops and warriors as your stronghold progresses, train units and keep them fed and paid to see their power grow and become truly unconquerable.

Watch as your army grows from basic units to heavy cavalry, sorcerers and more.

TEAM UP TO CONQUER
Join a fellow Conan Unconquered player and team up online to build a shared stronghold capable of fending off enemy hordes. Build structures freely between you - including research upgrades and wall defenses - creating a truly unique and co-operative multiplayer experience.

LEGENDARY HEROES & POWERFUL GODS
Lead your defense with Conan himself with the Legendary Heroes, powerful units that can greatly influence the outcome of battles. Use their special abilities and equip them with unique artifacts found throughout the world to boost their power.

Build a temple and dedicate your stronghold to deity Mitra. Summon their massive avatar that towers above the battlefield and crushes vast amounts of enemy troops with its mere footsteps.

PAUSE FOR THOUGHT
Take a step back from the real-time combat and pause at any time to issue commands and start construction of new buildings.

MULTIPLE THREATS BEYOND BATTLE
Be cautious of fallen soldiers on the battlefield as their bodies begin to rot and spread disease, quickly turning the tide of war... a particular advantage for the necromancers to bolster their armies!

DEEP EXPLORATION
Experience randomly generated maps with infinite re-playability, each with its own opportunities for daring players to explore beyond their stronghold. Head out into the unknown to discover ruins sheltering great treasures - but be mindful, as these are protected by huge guardians.

Fans of Command & Conquer and strategy battle games are in for a treat with Conan Unconquered. Stepping away from the MMORPG setting of Conan Exiles, Unconquered allows players to build their own stronghold capable of withstanding brutal monstrous foes. With fire, disease and countless hordes of enemies attempting to breach the gates, you'll need to assemble one of the finest armies that the Conan universe has ever seen... you could actually get Conan to help you too!
Redeem on Steam
This game requires a Steam account to play.
Instant delivery
Your purchased keys will be available immediately.*
Officially licensed
All our keys are sourced direct from the game's official publisher.

£7.64
£16.99
-55%
Activates in United Kingdom
Get a coupon for ...
5% Offyour next order
when you purchase this product
Exclusions apply. The coupon will be emailed to you.
Redeem on Steam
This game requires a Steam account to play.
Instant delivery
Your purchased keys will be available immediately.*
Officially licensed
All our keys are sourced direct from the game's official publisher.