Rated 'EXCELLENT' Based on 66,845 reviews
14 Day Money Back Guarantee on this product** 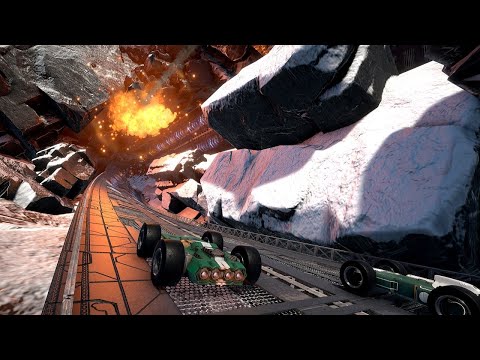 Harness the power of gravity-defying wheeled or airborne vehicles, and smash your way through opponents with a bristling arsenal of outlandish weapons. GRIP delivers one of the fastest and most unique racing experiences ever as you scale walls, ceilings and anything else you can get your ride onto. Master twisting tracks, tricks and perform ridiculous stunts, fighting your way across alien planets to become the ultimate vehicular assailant.

NOW IN VR
Prepare for the most intense, mind-melting racing experience in VR! Inject yourself into the game, feeling every turn, impact and stomach-testing inversion. Can you make it through the race? Only one way to find out…

Get a GRIP!
Get behind the wheel of tank-like vehicles packing ferocious speed and armed to the teeth with heavy weapons.

PEDAL TO THE METAL
Make your ride stand out from the rest with paint job, rim and tire customization. Grab power-ups and weapons - from shields and turbo to missiles and explosive darts - as you zoom your way around 10 race tracks, three arenas and 15 Carkour courses. Hold onto your hat as gamers will hit speeds of up to 767mph driving on floors, walls and ceilings!

A lovechild of the Tyco Rebound 4x4 RC and Bizarre Creations' Blur - GRIP features brilliantly designed race tracks filled with looping roads and blockades that can be used to wipe out your opponents. With a variety of game modes, vehicle customizations and an adrenaline-fuelled soundtrack, you'll be loving life at 767mph!

£7.99
Redeem on Steam
This game requires a Steam account to play.
Instant delivery
Your purchased keys will be available immediately.*
Officially licensed
All our keys are sourced direct from the game's official publisher.

£24.99
Activates in United Kingdom
Also available in this bundle
Platinum VR Collection Build your own Bundle
2 products for £5.99
Get the following items free with any paid order.
Easter Eggstravaganza Mystery Coupon
FREE
FREE
Redeem on Steam
This game requires a Steam account to play.
Instant delivery
Your purchased keys will be available immediately.*
Officially licensed
All our keys are sourced direct from the game's official publisher.