Rated 'EXCELLENT' Based on 68,775 reviews
14 Day Money Back Guarantee on this product** 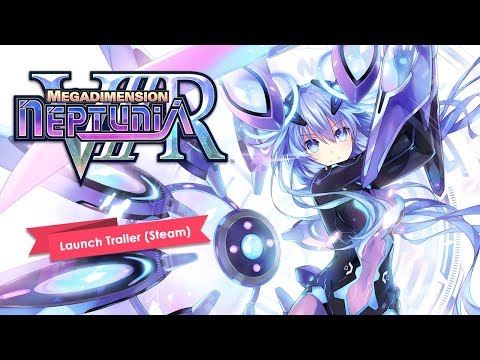 *The HTC Vive and Oculus Rift are compatible, but a VR headset is not required to play the game.

This enhanced version of 2016’s Megadimension Neptunia™ VII features smoother graphics courtesy of a new engine, a revamped battle system, and a whole new VR experience. Now, their dimensions and yours are connected! Hang out one-on-one with each of the Gamindustri Goddesses, listen to their conversations, and watch as the Goddesses react to you!

Gamindustri – a world sitting at the convergence of multiple dimensions. Of these existed the Zero Dimension, a world on the brink of collapse.
Zero Dimension's last guardian, Uzume Tennouboshi, waged a war against a mysterious evil known as the Dark CPU. Her desperate cries for help crossed dimensions and reached Neptune, the CPU of Planeptune, who would leave her world to join the fight.

Their fateful meeting would open the path to a new adventure.

And once their world is saved, they’ll join you in yours!

Get in Tune with Neptune, Now in VR! - Enter the Player’s Room with the special VR mode to customize your room and hang out one-on-one with characters from the Neptunia series! The HTC Vive and Oculus Rift can enhance the experience, but are not required.

New Strategies, New Possibilities, and Fierce Attacks - The turn-based battle system in this JRPG is spicier than ever! Players can choose attack combos on-the-go, use dazzling specials, and even position teammates to perform devastating team attacks!

Take Battles to the Next Level - Characters get two levels of transformations for another layer of tactics and even more powerful attacks!

-50%
£0.79
£0.39
Redeem on Steam
This game requires a Steam account to play.
Instant delivery
Your purchased keys will be available immediately.*
Officially licensed
All our keys are sourced direct from the game's official publisher.

-55%
£11.39
£5.12
©2018 IDEA FACTORY / COMPILE HEART All rights reserved. Neptunia is a trademark of IDEA FACTORY. Licensed to and published by Idea Factory International, Inc.