Rated 'EXCELLENT' Based on 69,215 reviews
14 Day Money Back Guarantee on this product** 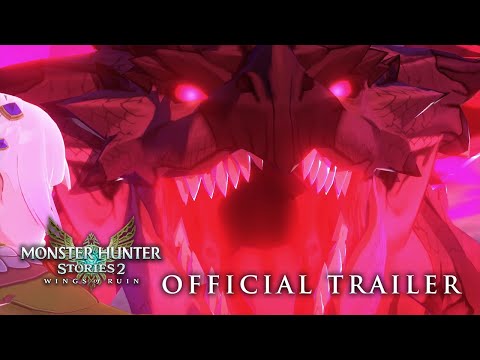 Become the legendary Rider you were born to be with your Monster Hunter Stories 2: Wings of Ruin Steam PC key. In this second installment of the turn-based RPG series set in the world of Monster Hunter, you'll form bonds with friendly 'Monsties' to fight alongside them as you take part in an epic story.

A NEW GENERATION
Become the grandson of legendary Rider Red, and set off on your own quest across the stunning Hakolo Island. The story begins with a fateful encounter with Ena, a Wyverian girl who has been entrusted with an egg with the potential to hatch into a legendary Rathalos, which could wreak havoc if awakened to its destructive power.

Embark on a journey that will test the bonds of friendship in a changing world, and discover the truth behind the legends of old. Lead your rare black-winged Rathalos on a courageous journey and show your strength in the heat of battle.

MY TURN!
Experience turn-based strategy battles, similar to the likes of Pokemon, Final Fantasy, and Tales of Vesperia. Find strengths in your battle party by using specific attacks to dominate foes with three main attack types - Power, Technique, and Speed.

Use the power of Kinship to unleash a powerful, heavy-hitting attack where Rider and Monstie land a devastating blow.

MEET THE MONSTIES
Engage and team up with Riders and over 25 confirmed monsters returning from previous popular entries in the Monster Hunter mainline franchise. See the likes of Diablos, Barioth, Anjanath, Nergigante and Rathian and many more!

UNIQUE CHARACTERS
Friend or foe? You'll uncover intriguing and mysterious characters along the way. Meet Kayna - a free-spirited and has a bubbly Rider from the Mahana Village - as well as Avinia, who rides a Barioth called ‘Frostfang’ and is dedicated to rebuilding the village of Kuan Village after it was destroyed by the Black Blight.

Navirou, a Felyne companion, acts as your guide and is determined to help you as you endeavor to become a fully-fledged Rider.

Edition: Standard Edition
Standard
Deluxe
£41.99
£49.99
-16%
Activates in United Kingdom
Spend over £8.00 in a single order to get the following items for free.
Summer Sale Spin to Win
FREE
FREE
Get a coupon for ...
5% Offyour next order
when you purchase this product
Exclusions apply. The coupon will be emailed to you.
Redeem on Steam
This game requires a Steam account to play.
Instant delivery
Your purchased keys will be available immediately.*
Officially licensed
All our keys are sourced direct from the game's official publisher.