Rated 'EXCELLENT' Based on 68,764 reviews
14 Day Money Back Guarantee on this product** 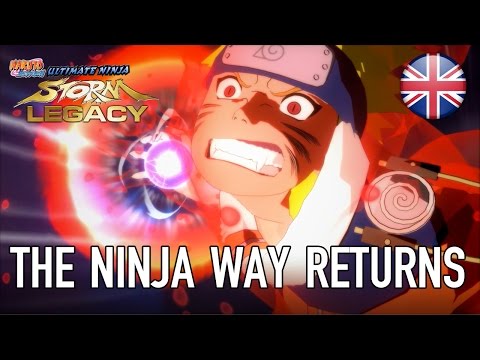 High-intensity, arcade-style fighting awaits in the Naruto Shippuden: Ultimate Ninja STORM Legacy - all four STORM games in one breathtaking collection, fully supported in high definition. With this Steam key, players will experience a popular series that has established itself among the pinnacle of anime and manga adaptations to video games!

NARUTO: ULTIMATE NINJA STORM:
The first installment of the Ninja Storm game series allows players to battle in full 3D across massive environments. Players have the ability to unleash powerful jutsu attacks, perform acrobatic evasive maneuvers and even run up walls and over water as they fight their opponents in the ultimate battle to be the Ultimate Ninja.
Character’s fighting styles can be customized, and players can also recruit up to two support characters to give their play style a more personalized touch. The game includes 25 playable characters, each of which can also be used as a support character during battle. The story mode loosely covers the events of the anime up to episode 135. Players are able to explore the Hidden Leaf Village between missions, which acts as a central hub for the story mode, and access more missions.

NARUTO SHIPPUDEN: ULTIMATE NINJA STORM 2:
The second installment of the Ninja Storm game series takes players through the Naruto Shippuden story arc. It incorporates new battle systems that help enhance the players' experience. Players must choose a companion to fight alongside them and, once the perfect combination is found, they can unleash their special team techniques and lay waste to their opponents.
Naruto Shippuden: Ultimate Ninja Storm 2's gameplay retains many of the elements of the first game and even has 23 fighting stages. The game consists of nine chapters, this includes the prologue and an extra chapter. Each character has the opportunity to gain new combos and jutsu by activating the Awakening Mode – players can also unlock new combos and jutsu for characters as the game progresses. Support characters have also returned to this installment with two new features, the first being Support Types.
These can be unlocked for each support character and decide the characters actions. The second is the Support Drive, which is split into two levels, the first being activated when a player’s support character is summoned enough times. When Support Drive level two is activated, players are capable of releasing a Team Ultimate Jutsu but only for a limited time. A Team Ultimate Jutsu drains the player’s chakra by a massive amount, but it also delivers a massive amount of damage if it makes contact with an unguarded enemy. The game has a traditional JRPG screen for movement and gameplay, in addition to the Leaf Village, players are given the opportunity to go outside the village and travel through a range of different environments.
The game also brings back boss battles with quick time events and cutscenes. There are also multiple online features available to players such as, quick matches where opponents are chosen at random and matches are ranked with a leaderboard.

NARUTO SHIPPUDEN ULTIMATE NINJA STORM 3:
The third installment if the Ninja Storm game series has been given a complete overhaul for its full burst comeback, and players have the opportunity to wage the 4th Great Ninja war. The game offers extreme immersion, allowing players to confront overpowering bosses including the gargantuan Tailed Beasts in memorable battles defying time and death. Storm 3 has the series most extensive roster yet, with the highly anticipated Naruto, Madara or the Jinchurikis.
New playable characters such as Kabuto can reach the almighty Sage mode, allowing you to defeat your enemies in both online and offline mode. The game itself has 80 playable characters and seven support characters, as well as having a newly modified fighting system. The Awakening Mode, a state that gave each character enhanced abilities when their health was low, has made a return once again – which can be used at any time during a fight for certain characters. As in the previous games, the player can choose two characters to assist the player character in battle. The assisting characters now can also aid the playable one through the use of thirteen different types of combos.
Players can now use the new addition to the Team Attack System to support their characters to get ready to charge and attack. Additionally, if players have one support character then they have 10 health bars and if they have two then each support character has five each. The story mode of the third installment is very much like the previous version as it features boss battles that include quick time events and require the use of strategies to defeat enemies. It also includes the Ultimate Decision Mode, which gives players the option to change the difficulties of the battle with bigger prizes for the higher difficulties.
Additionally, the game has mob battles in which the player controls a single character that has to battle a series of enemies. In this mode, players retain the controls from regular fights and they can also transport every time they defeat an enemy to another one. There are 100 new missions for players to embark on many with their work unique challenges to overcome, along with 38 new additional costumes from the Naruto Shippuden: Ultimate Ninja Storm 3 DLC packs.

NARUTO SHIPPUDEN: ULTIMATE NINJA STORM 4 ROAD TO BORUTO:
The fourth installment of the Ninja Storm game series is taking you on a colorful and breathtaking ride. The game has a totally revamped battle system and players will dive into the most epic fights they have ever seen in the Ultimate Ninja series. The gameplay for Ultimate Ninja Storm 4 is very similar to the previous games, in which players battle each other in a 3D arena. Players are able to fight the battles on the sides of the arenas, and even battle on the walls.
One of the major changes made to the game is the ability to have one character be on the wall while the others remain on the fields – in the original games, the second player was automatically moved to the wall to keep the battle flowing. Another new feature added to the game is the ability to swap characters during battle. The Awakenings and ultimate jutsus features have made a return from previous Storm games, and players can now also share these features between their switchable characters – meaning players can build up their meter with one character and then change over to another character but still use the abilities.
The new game also has the ability, in both free battle and boss battles, to break weapons and armor. In support of this players also have the ability to create elemental damage to their enemies.

79
Critic Review Score
(12 Reviews)
Reviews provided by OpenCritic
Attack of the Fanboy
Lewis White
"Naruto: Ultimate Ninja Storm Legacy is not only the best recreation of Masashi Kishimoto's work available for fans of the series, but the best way to bring new fans into the...
ZTGD
Ken McKown
7 / 10
"It is hard to argue the value here. I have always enjoyed the Ultimate Ninja Storm games even without knowledge of the source material. The fighting is fun and the stories are...
GearNuke
Danial Arshad Khan
9 / 10
"This is the ultimate Naruto collection and even though the combat system might be similar, the adventure mode offered here is unique with each game offering its own set of...
Reviews provided by OpenCritic
Redeem on Steam
This game requires a Steam account to play.
Instant delivery
Your purchased keys will be available immediately.*
Officially licensed
All our keys are sourced direct from the game's official publisher.

What is cel-shading - Plus our pick of cel-shaded games

£48.39
£54.99
-12%
Activates in United Kingdom
Spend over £8.00 in a single order to get the following items for free.
FREE
Get a coupon for ...
5% Offyour next order
when you purchase this product
Exclusions apply. The coupon will be emailed to you.
Redeem on Steam
This game requires a Steam account to play.
Instant delivery
Your purchased keys will be available immediately.*
Officially licensed
All our keys are sourced direct from the game's official publisher.

What is cel-shading - Plus our pick of cel-shaded games