Rated 'EXCELLENT' Based on 69,107 reviews
14 Day Money Back Guarantee on this product**

Of Carrots And Blood 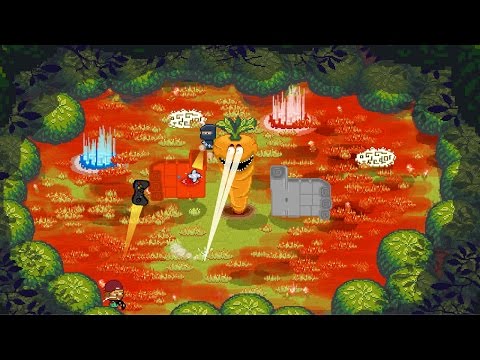 Of Carrots And Blood is a twin-stick survival arena shooter about kissing bunnies, hungry mutants and a lot of blood.

You will be thrown into a combination of old school arcade action, bullet hell chaos, cute retro pixel art and romantic love affair where the only thing that matters is to survive the never ending waves of mutants while defending a giant carrot and making out with your partner. Wait, what?! To release the tension during breaks, you can kiss your beloved bunny partner anytime in the game with the patented POWER KISS MECHANIC! You will need a steady hand and some mad skills to get on that high score list. Shoot your way through hordes of hungry mutants and saturate the forest floor with their gushing blood!
Crack the online highscore in the endless single player mode, play through a short but very intense CO-OP story mode or grab your friends and kill each other in one of three pvp modes, together on your couch or online!!

Survive alone against relentless waves of mutants, ogres and other crazy creatures. You must bring your very best carrot shooting skills to the table! One mistake means the end for your short bunny life.

If your carrots are not enough to stop those nasty mutants, you can grab one of the many power-ups which are dropped by some of the enemies you have killed.

You can prove to your friends and the whole world, that you are in fact THE most dangerous bunny out there. Practice and kill more mutants than everyone else to raise to the top of the online highscore list!!

Grab a friend and survive together in the 2 player CO-OP campaign! A big surprise is waiting in the end.

Grab even more friends and kill each other in brutally bloody bunny deathmatch with up to 4 players. Show 'em who's boss!

Besides the 4 player DEATHMATCH there are also 2 other PVP modes. You can shoot your friend into deadly spikes while trying not to fall down into the depth of THE ABYSS. This 2 player PVP mode puts you in an arena surrounded by dangerous spikey bushes. Touching them means sudden death! And if this wasn't bad enough, the ground is opening up and the crack grows into a giant gap.

Or have fun in the MINEFIELD arena. In this 2 player PVP mode you can activate plates on your side which leads to an explosion of the mirrored plate on your opponents side. Watch your steps!

PLAY ONLINE!!! You can play all of the above multiplayer game modes including CO-OP, DEATHMATCH, THE ABYSS and MINEFIELD online. Host a game or join one of your friends games.

Kiss your partner anytime in the game to show him/her some love! KISS KISS KISS! But love is a dangerous game...kissing your partner could lead to certain death because you wont be able to move and could eventually be killed in the act!

Collect shiny brain pieces and DNA samples which are dropped by dead enemies from time to time.

You can fuse them at the Doc's laboratory to unlock new characters.

You can unlock 15+ original chiptune soundtrack vinyls, which you can use as background music in the game.

You can also wear fancy sunglasses, which will have a visual effect on the game...PLUS they make your character look really cool!

Collect achievement trophies for successfully completed challenges in the game like for example "Kill 10,000+ mutants", "Survive 5 waves without using power-ups" or "Kiss 30 times in one game"

Unlock special items which you can equip and use in the game to boost your abilities. For example you can buy the SNEEZE POWDER which makes the giant carrot sneeze and shoot multiple projectiles in every direction. This might be useful when there are too many mutants attacking the carrot, while you busy killing mutants coming from the bushes.

You will only be able to equip one item at a time, so you need to think ahead on what might be the best choice for your play style.

The visuals and effects as well as the tempo of the old school arcade action in Of Carrots And Blood are heavily influenced by the amazing games and talks/presentations by the brilliant indie game studio Vlambeer. It's all about juiciness and the "feel". The more visual and audio feedback we have put in, the more believable the characters and game world got. That is a big part of why you hopefully will enjoy Of Carrots And Blood so much. If you don't like screenshake, you can always turn it off in the game (even though we wouldn't recommend to play that way)


Become the ultimate mutant hunter in OF CARROTS AND BLOOD!

Trite Games is a true two person indie game studio from Berlin, Germany. We are producing everything inhouse. That includes the code, the art, the music, the sounds, videos and also a little voice acting in the game.

£1.99
Activates in United Kingdom
Get a coupon for ...
5% Offyour next order
when you purchase this product
Exclusions apply. The coupon will be emailed to you.
Redeem on Steam
This game requires a Steam account to play.
Instant delivery
Your purchased keys will be available immediately.*
Officially licensed
All our keys are sourced direct from the game's official publisher.