Rated 'EXCELLENT' Based on 69,038 reviews
14 Day Money Back Guarantee on this product** 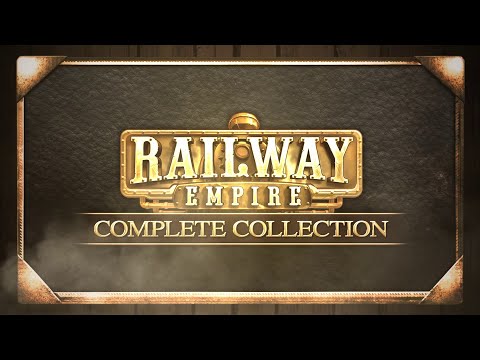 The Industrial Revolution is yours for the taking, it's time to conquer the continents of the known world with your Railway Empire - Complete Collection Steam PC key. In this collection, you'll experience the Railway Empire simulation strategy base game and all current updates - plus all eight DLCs: Mexico, The Great Lakes, Crossing the Andes, Great Britain & Ireland, France, Germany, Northern Europe, and Down Under.

Take command of these great 'Iron Horses' as you kickstart a fierce race for supremacy on rails in a historical era.

A BOOMING INDUSTRY
Build and expand a wide-ranging rail network to connect stations and transform remote locations into booming urban metropolises. Immerse yourself as an ambitious leader of a railway company and set tracks across 100 years of history and multiple countries - ultimately establishing a Railway Empire.

ARE YOU UP TO THE TASK?
Test your skills in 15 unique scenarios and 4 challenge maps, or experience the true pioneering spirit and seamless possibilities of the Free and Sandbox modes - including realistic conditions with an enhanced weather system and Night Mode.

Take advantage of the strengths and weaknesses of more than 80 historically accurate locomotives and assign them to your rail routes, and compete with up to three rival companies, sabotaging their efforts with bandits and spies.

£29.39
£34.99
-16%
Activates in United Kingdom
Get a coupon for ...
5% Offyour next order
when you purchase this product
Exclusions apply. The coupon will be emailed to you.
Redeem on Steam
This game requires a Steam account to play.
Instant delivery
Your purchased keys will be available immediately.*
Officially licensed
All our keys are sourced direct from the game's official publisher.