Rated 'EXCELLENT' Based on 73,595 Reviews
14 Day Money Back Guarantee on this Product

Get a coupon for ...
5% Offyour next order
when you purchase this product
Exclusions apply. The coupon will be emailed to you.

Choose your squad and prepare to run through the jungle in all-out warfare with your Rising Storm 2: VIETNAM - Digital Deluxe Edition Steam PC key. In this multiplayer FPS, you'll be able to choose from hundreds of character customization options and fight in huge online battles - as well as access to early unlocks & exclusive items in this edition.

WHAT IS RISING STORM 2: VIETNAM
Do you smell that? That's napalm, son. I love the smell of napalm in the morning.

Rising Storm 2: VIETNAM is the sequel to PC Gamer’s 2011 & 2013 ‘Multiplayer Game of the Year’, published by Tripwire Interactive and developed by Antimatter Games, the same team that created the award-winning and innovative asymmetric gameplay of the original Rising Storm.

For the first time, the authentic gunplay and visceral first-person action of the Red Orchestra series come to an era of automatic rifles, man-portable grenade launchers and more modern weapons systems. Rising Storm 2: VIETNAM casts players into a brutal, authentic recreation of the Vietnam War.

UNIQUE TO YOU
Customize your characters with additional uniform and equipment variants earned as they play, including new headgear, clothing, tattoos, glasses and more. The enhanced squad system allows you to set up squads as you want them - name them, add their friends, set the squad tag color in-game.

Once in-game, you'll be able to easily identify your squad in the world and on maps - as well as dedicated VOIP channels for the squad, and bonuses for working together.

GRAND-SCALE WAR
Head into intense tactical action for up to 64 players in battles as the U.S. Army & Marines Corps, Australian Army and the Vietnamese's NVA and the Viet Cong forces, each with its own unique abilities and tactical advantages such as Napalm Strikes, Artillery Barrages, surface-to-air missiles, traps, ambushes and more.

Weapons also have a wide range of functionality with in-game implications, including adjustable stocks, attachable bayonets, and a new and advanced recoil system which builds on the already phenomenal weapon handling that the Red Orchestra series is famous for.

Players on the US team are able to pilot three different helicopters - the UH-1H 'Huey' transport, the OH-6 'Loach' light recon and the powerful AH-1G 'Cobra' attack helicopter. Play as the Aussie forces to use the Bell UH-1 Iroquois 'Bushranger' chopper.

REALISTIC BATTLEFIELD
Each map faithfully recreates the look of the Vietnam experience and pulls players directly into the war with its extreme authenticity to real life. Game types include Red Orchestra's classic territory control mode, the new Supremacy mode, for large-scale combat including helicopters, VC tunnels and more, as well as the new smaller Skirmish mode and maps designed for 16 or fewer players.

These new smaller maps are designed to be a more competitive, squad-based experience that reflects the small unit actions that Vietnam is famous for. 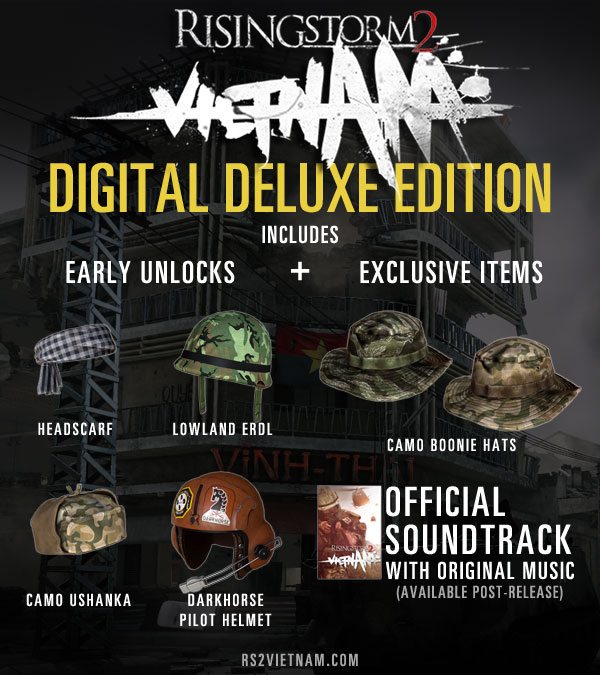 DLC for this game

Less than 1% of orders are flagged for manual authorization. This process can take up to one working day, but orders are normally reviewed within a few hours.