Rated 'EXCELLENT' Based on 68,554 reviews
14 Day Money Back Guarantee on this product** 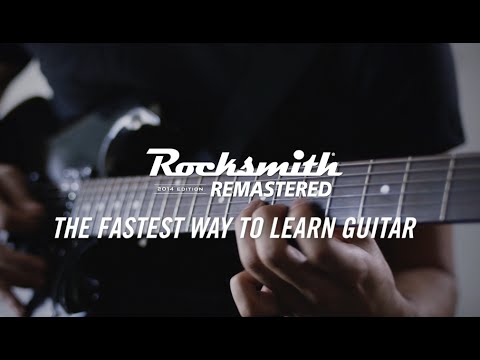 Plug in, turn up the volume, and experience the fastest way to learn guitar, now better than ever, with your Rocksmith 2014 Edition - Remastered Steam PC key. With this music sim, you'll be able to join over three million people who have learned to play guitar with the award-winning Rocksmith method.

Use any real guitar or bass with a 1/4 inch jack directly into your PC or Mac and you'll learn to play in just 60 days!

BEGINNER TO ROCK LEGEND
With Rocksmith, you can learn everything from single notes to chords and advanced techniques, all at your own pace. You'll learn fast because it adapts to your skill level as you play, whether you're a beginner or an experienced player.

LOADS OF CONTENT
Rocksmith 2014 Edition - Remastered includes a free downloadable update with a customizable learning curve, expanded practice tools, stat tracking, improved menus, and more. If you already own the original game, you can download the remastered updates for free - there's no need to repurchase!

CUSTOMIZE AND LEARN YOUR WAY
Build custom Song Lists to group tracks into personalized practice sessions. Your favorite songs in Eb Standard tuning, just your daily warm-up tracks, the current playlist of your band’s setlist, all the songs that feature Dave Grohl - you pick the criteria, and Rocksmith 2014 Edition Remastered keeps them separated.

Everybody learns at their own pace, so Remastered lets you adjust how quickly Rocksmith's Dynamic Difficulty shifts. Need a few more runs before you really feel you have it under your fingers? Simply ease off on the controls and the game gives you the time you need.

Likewise, if you’re the type of player who feels like you’re ready to move forward a little faster, you can accelerate the pace, too.

FINE-TUNING
Pause and navigate freely through entire tracks in Riff Repeater, and loop phrases more efficiently. View all song arrangements from the improved Song Hub, and launch directly into any of them without changing paths.

Filter Nonstop Play songs by tuning - you can even skip the tuner if you like!

Maybe you've just bought a guitar and don't own an amp, or perhaps you want help learning the ropes to become a rock god. With Rocksmith, you'll be able to plug straight into your PC and learn from a great roster of classic tracks with step by step guides on how to play. Plus, with additional mini-games included, you can make learning how to play guitar even more fun. You'll thank us later when you become the next Jimi Hendrix or Slash!

83
Critic Review Score
(12 Reviews)
Reviews provided by OpenCritic
PCMag
Jeffrey L. Wilson
"Rocksmith may resemble Guitar Hero or Rock Band on its surface, but the title is a surprisingly thorough instructional tool that teaches you how to play a real guitar."
Gameplanet
Matt Maguire
9 / 10
"Rocksmith 2014 many improvements on its predecessor see the franchise elevated from a decent diversion to a great tool for budding strummers and shredders. There's a ton of...
We Got This Covered
John Fleury
"Polished, educational, and fun, Rocksmith 2014 is an improvement on the original in almost every way."
Reviews provided by OpenCritic
Redeem on Steam
This game requires a Steam account to play.
Instant delivery
Your purchased keys will be available immediately.*
Officially licensed
All our keys are sourced direct from the game's official publisher.

£7.27
£25.99
-72%
Sold out - Sorry, this product is temporarily unavailable.
Get a coupon for ...
5% Offyour next order
when you purchase this product
Exclusions apply. The coupon will be emailed to you.
Redeem on Steam
This game requires a Steam account to play.
Instant delivery
Your purchased keys will be available immediately.*
Officially licensed
All our keys are sourced direct from the game's official publisher.