Rated 'EXCELLENT' Based on 67,304 reviews
14 Day Money Back Guarantee on this product** 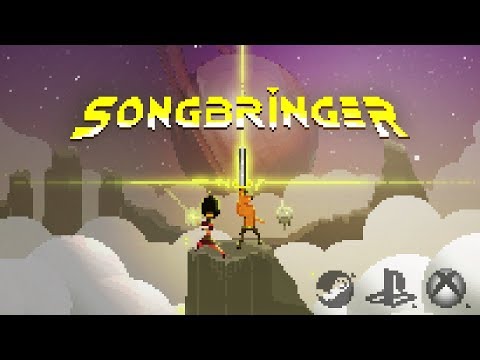 You play the role of protagonist and accidental hero, Roq Epimetheos. With a propensity for partying and making music, he cruises the galaxy with his skybot Jib aboard the ship Songbringer, searching for verdant planets absent the presence of galactic police.

When Roq finds the nanosword hidden in a cave on Ekzera, he unwittingly awakens an ancient evil. The sword is pretty fraggin' sweet though. It... hums.

Jib began life as a human boy on the skycity planet Yuerder. Growing up, he took an interest in programming artificial intelligence, eventually making a career for himself. On his deathbed, he illegally transferred his consciousness into a skybot, destroying the consciousness link thereby preventing overwrite.

Jib scans the bodies of your fallen foes, sometimes uncovering valuable loot. He can also gain the ability to stun foes. Jib is automatically controlled by AI, or player two can play Jib in local co-op mode.

Lacking the ability to grow one as a human, Jib is obsessed with mustaches.

You choose a 6-letter world seed when beginning a quest. This seed is used to procedurally generate the planet, overworld, secrets and dungeons.

Entering the same world seed will always generate the same world, no matter which platform you are playing on. Thus lore and competition can be shared with others.

Play a new seed and surprise yourself with a new world. Or enter a seed you are familiar with for a speed run.

The generated overworld is open and non-linear. Head in any compass direction you like or play dungeons out of order. You aren't even required to pick up the sword.

Of the nine dungeons Roq and Jib can uncover in each world:

Some are thematic, containing puzzles and items integral to completing the world.

Some are secret, hidden side quests in which abilities can be gained.

Some are tough as nails with overwhelmingly difficult foes, mobs and bosses.

£11.75
£15.99
-27%
Activates in United Kingdom
Get a coupon for ...
5% Offyour next order
when you purchase this product
Exclusions apply. The coupon will be emailed to you.
Redeem on Steam
This game requires a Steam account to play.
Instant delivery
Your purchased keys will be available immediately.*
Officially licensed
All our keys are sourced direct from the game's official publisher.