Rated 'EXCELLENT' Based on 69,185 reviews
14 Day Money Back Guarantee on this product** 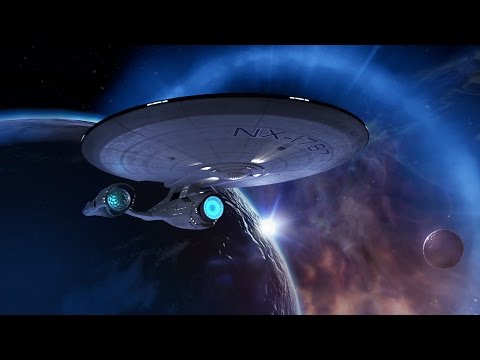 Star Trek: Bridge Crew puts you and your friends in the heart of a starship, where- as officers of the Federation- every action and decision you make together will determine the fate of your ship and crew. Developed specifically for VR, Star Trek: Bridge Crew is the only game to offer a true-to-life level of immersion in the Star Trek universe.

In Star Trek: Bridge Crew, the Federation dispatches you and your crew to command the new vessel U.S.S. Aegis as part of a critical initiative. Your mission: explore a largely uncharted sector of space known as The Trench, in hopes of locating a suitable new home world for the decimated Vulcan populace. The Trench contains stunning beauty and undiscovered wonders, but also strange anomalies and dangers yet unknown. The Klingon Empire is also active in the region, and their purpose is undoubtedly a threat to the Federation’s plans. It’s up to you and your crew to chart the sector to determine the Klingons’ aims, and to secure a peaceful Federation presence.

DESIGNED FROM THE GROUND UP FOR VR

Star Trek: Bridge Crew was developed specifically for virtual reality and capitalizes on the powerful sense of social presence possible only through VR. Our hand tracking with full body avatars and real time lip sync allow players to genuinely experience what it’s like to serve as an officer on the bridge of a Federation starship.

Make strategic decisions and coordinate actions with your crew to complete the mission. In co-op, players can form a crew of four to serve in the roles of Captain, Helm, Tactical and Engineer. Each is crucial to the success of the varied missions you face and the safety of your crew and ship.

A UNIQUE SHIP FOR A UNIQUE MISSION

Take command of the U.S.S. Aegis, the first ship of her kind. Whether plotting courses and analyzing scan data or hacking enemy shields and targeting vulnerable ship subsystems, you’ll have Starfleet’s cutting-edge technology at your fingertips. The Aegis’ unique design makes her ideal for the dangerous mission in The Trench, but you’ll have to master her systems, both familiar and experimental, to save the day.

Star Trek: Bridge Crew offers a compelling and engaging co-op experience, with an unmatched sense of reality. You’ll need more than just individual skill to overcome the challenges you’ll face with one another; communication, trust, and close crew coordination are the keys to victory.

Key Provider Instructions In order to activate this game, you will require a third-party Oculus account. For full details on how to activate please follow this link: https://support.ubi.com/en-GB/Faqs/000025429/How-to-activate-games-in-the-Oculus-Home-desktop-application

75
Critic Review Score
(38 Reviews)
Reviews provided by OpenCritic
Game Informer
Matt Miller
7.3 / 10
"Thrilling at first for Star Trek faithful, but lacks the depth for long-term engagement"
GamesRadar+
Andy Hartup
"A thrilling, authentic recreation of Star Trek that brings out the team player in everyone. Just a shame it's such a pain to set-up."
Attack of the Fanboy
Kyle Hanson
"Delivering on the dream of a Star Trek VR experience, Star Trek: Bridge Crew is a fantastic new game for anyone with a VR setup. You might want more, but what is available will...
Reviews provided by OpenCritic
Redeem on Oculus
This game requires a Oculus account to play.
Instant delivery
Your purchased keys will be available immediately.*
Officially licensed
All our keys are sourced direct from the game's official publisher.

*This isn't compatible with Oculus Quest

£30.33
£33.99
-11%
Activates in United Kingdom
Get a coupon for ...
5% Offyour next order
when you purchase this product
Exclusions apply. The coupon will be emailed to you.
Redeem on Oculus
This game requires a Oculus account to play.
Instant delivery
Your purchased keys will be available immediately.*
Officially licensed
All our keys are sourced direct from the game's official publisher.

-15%
£23.79
£20.14
TM & © 2016 CBS Studios Inc. © 2016 Paramount Pictures Corp. STAR TREK and related marks and logos are trademarks of CBS Studios Inc. All Rights Reserved. Game software © 2016 Ubisoft Entertainment. All Rights Reserved. Ubisoft and the Ubisoft logo are trademarks of Ubisoft Entertainment in the US and/or other countries.