Rated 'EXCELLENT' Based on 68,722 reviews
14 Day Money Back Guarantee on this product** 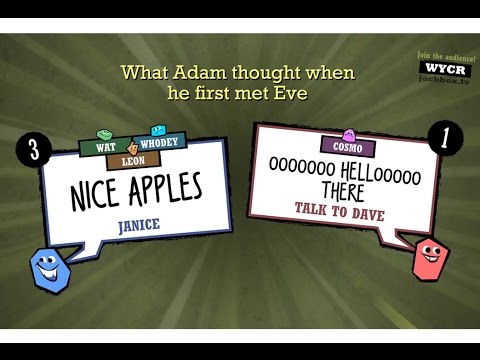 FIBBAGE (2-8 players)
The runaway hit bluffing game with over 500 brand-new questions, more than 2x the original! Plus new features, like the deFIBrillator!
EARWAX (3-8 players)
The hear-larious sound-effects game that will leave you up to your ears in laughter! Cow moo? Huge explosion? Or tiny fart? Which to choose?
BIDIOTS (3-6 players)
The absurd art auction game where you draw right there on your phone or tablet. Outbid your opponents for weird art pieces – drawn by players themselves – and win this strangely competitive auction game! Don’t be a bidiot!
QUIPLASH XL (3-8 players)
The say-anything, gut-busting Quiplash XL, which includes everything in Quiplash, Quip Pack 1, AND over 100 brand-new prompts!
BOMB CORP. (1-4 players)
The bomb-defusing nailbiter of a party game! As interns at Bomb Corp., you must defuse random bombs in the office in order to keep your jobs. You’ll probably die, but it’ll be good work experience!
ACCESS FOR ALL
Hosted on your Windows PC or Apple Mac through Steam, players play using their phones, tablets, or even computers as controllers – making it the perfect easy-to-join party starter. No extra controllers needed! And, spectators can join and affect some games by playing as Audience members!

YOUR OFFICIAL THE JACKBOX PARTY PACK 2 STEAM KEY GIVES YOU:

Party fun for all the family


NOTE: This game is local play, but can be enjoyed over streams with remote players.

Fanatical about: The Jackbox Party Pack 2

Featuring five rib-tickling, knee-slapping and gut-busting games, the comedy returns to your Steam Library. The Jackbox Party Pack 2 includes the second iteration of the ever popular Fibbage, and Quiplash XL, the sound-based Earwax, the Pawn Stars inspired Bidiots and the deadly Bomb Corp.

76
Critic Review Score
(20 Reviews)
Reviews provided by OpenCritic
Kinglink Reviews
4.5 / 5
"Jackbox Party Pack 2: A solid pack of games, though not the strongest. Fibbage, Quiplash and Bomb Corp are great, but most games really need more than 3 players. Bomb Corp is...
God is a Geek
Dan Naylor
8 / 10
"More Fibbage, more Quiplash. Do you need anything else?"
We Got This Covered
Shaan Joshi
"While some of the games may have got lost or muddled in transition, the Jackbox Party Pack 2 is just as fun as ever. Just make sure you have some friends to play with. "
Reviews provided by OpenCritic
Redeem on Steam
This game requires a Steam account to play.
Instant delivery
Your purchased keys will be available immediately.*
Officially licensed
All our keys are sourced direct from the game's official publisher.

£18.99
Activates in United Kingdom
Also available in these bundles
The Jackbox Party Trilogy
£45.57
The Jackbox Party Quadpack
£56.96
The Jackbox Quintpack
£75.80
Spend over £8.00 in a single order to get the following items for free.
FREE
Get a coupon for ...
5% Offyour next order
when you purchase this product
Exclusions apply. The coupon will be emailed to you.
Redeem on Steam
This game requires a Steam account to play.
Instant delivery
Your purchased keys will be available immediately.*
Officially licensed
All our keys are sourced direct from the game's official publisher.