Rated 'EXCELLENT' Based on 67,400 reviews
14 Day Money Back Guarantee on this product** 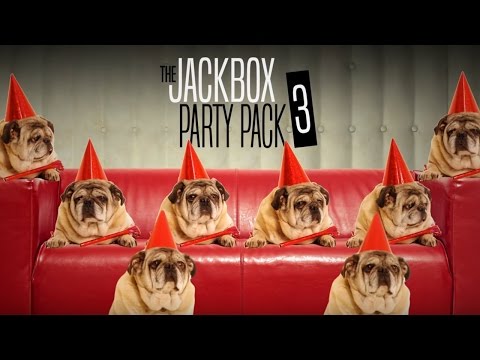 Looking for a fun-filled bundle of games to play with family and friends? You'll find it here with your The Jackbox Party Pack 3 Steam PC key. It's the threequel that you've been waiting for, as you'll enjoy hours of fun with these five phenomenal games all included!

WHAT IS THE JACKBOX PARTY PACK 3
It's the threequel that you've been waiting for, as you'll enjoy hours of fun with these five phenomenal games all included!

QUIPLASH 2 (3-8 PLAYERS)
The say-anything sequel. Play all new questions or make your own! Quiplash is played over three rounds. In the first two rounds, players are given two prompts to supply a humorous answer, and each prompt is seen by two random players.

Then, the prompt and the two provided answers are shown and players and the audience vote on which is funniest, with the players that provided the answers given points on how many votes they get. If they end up getting all of the votes, they get a "quiplash" and earn a bonus score.

The final round has all players reply to the same prompt, and players subsequently select three of the answers as the funniest. The winner is the player with the most points in the end.

It also includes “Audience Play-Along” (Default: ON). While players type their answers, audience members can answer a special audience prompt, with these answers appearing on-screen.

If “Manual Censoring” is on, the VIP can immediately end the play-along if offensive answers begin to appear. For extra safety, players can disable this feature all-together.

TRIVIA MURDER PARTY (1-8 PLAYERS)
A deadly quiz show where you match wits with a trivia-obsessed killer!

Trivia Murder Party is played like any trivia game, but with a twist. The presenter asks the players a number of trivia questions and if someone gets a question wrong, they have to fight for their lives in one of the super fun mini-games.

But if they lose the mini-game, they’re ‘murdered’ and are out of the game. But don’t worry, that isn’t the end as ghosts can still win the game!

When one player is left alive, the game goes to a final round allowing the dead to rejoin the race to the exit and to victory. Trivia Murder Party provides a 'No Writing and Drawing Mode' if players want to disable minigames with player input – this prevents players from entering anything offensive as an answer!

Players take turns guessing percentages regarding statements made about the general public, with the correct answers collected from internet users. Players then have to pick the percentage that they believe the most correct in regards to the statement provided, while the other players choose whether or not they think the correct answer is higher or lower than the percentage given by the player answering the question.

If the other players think the percentage is off by 15% or more, they can choose much higher or much lower and gain double points if they are correct. Player accrue points depending on the closeness to the actual percentage and the player with the highest points at the end of the game wins.

If the game has five or more audience members, the correct answers in the game will be based on the way your audience answers the questions, rather than the game’s built-in data. It’s a fun way to see how well players know their viewers.

TEE K.O. (3-8 PLAYERS)
The t-shirt slugfest where you battle your custom t-shirts to the death!

Players begin in chapter one, the training round, where they use their devices to draw two drawings – these can be of anything – however, if stuck players can use the suggestion button to help them decide. Once completed, everyone enters chapter two where the audience votes on which t-shirt they think is the best, the loser leaves the game while the winner goes on to challenge other players’ t-shirts until there is only one remaining.

The game progresses over four rounds until a final winner is crowned!

The game includes 'Audience Suggestions' (Default: ON). Much like the 'Audience Play-Along', audience members can submit suggestions for what the players should write and draw, and these suggestions appear on-screen.

It can be disabled in the moment by the VIP if 'Manual Censoring' is on, or disabled ahead of time using this setting. There is also a 'Quick Training' option (Default: OFF). When this setting is on, players draw twice during Chapter One of the game instead of three times, and writing time is shorter throughout the game.

The game is more fun with more drawings, but if players are streaming it may preferable to have a quicker game with less downtime for viewers.

FAKIN’ IT (3-6 PLAYERS)
One of your friends has something to hide in this sneaky game for tricksters!

During each round of play, all players will be sent a task to their device such as raising their hand, pointing to another player or making a strange face. However, one player will get nothing and that player is the faker – the aim is to figure out who the faker is, while the faker’s aim is to blend in with everyone else.

When the ‘go’ sound is heard, players must perform their action and the faker must try to blend in.
After each round, everyone must vote on their device who they believe the faker is, if everyone votes correctly, the faker is out – if not then the game continues with everyone having three chances to catch the faker out.

Fakin’ It is the one game in The Jackbox Party Pack 3 where all players have to be in the same room. However, audience members get secret information that not all the other players have, which makes it a fun game to stream as the chat votes for who they think the faker is.

YOUR OFFICIAL THE JACKBOX PARTY PACK 3 STEAM KEY GIVES YOU:

NOTE: The Jackbox Party Pack 3 is in English only. This game is local multiplayer, but can be enjoyed over streams with remote players.

Fanatical about: The Jackbox Party Pack 3

80
Critic Review Score
(15 Reviews)
Reviews provided by OpenCritic
Destructoid
Kevin McClusky
9 / 10
"There's a lot of value here for the price, and even if you could buy each of these games separately for five bucks apiece, I'd still recommend picking up all of them."
God is a Geek
Dan Murphy
8.5 / 10
"Jackbox is back once again and it’s better than ever with a sequel to a fan favourite, a Family Fortunes-style quiz and perhaps the best game Jackbox have ever created. Only a...
CGMagazine
Jordan Biordi
9 / 10
"The Jackbox Party Pack 3 is an excellent collection of games perfect for parties."
Reviews provided by OpenCritic
Redeem on Steam
This game requires a Steam account to play.
Instant delivery
Your purchased keys will be available immediately.*
Officially licensed
All our keys are sourced direct from the game's official publisher.

£16.06
£18.99
-15%
Activates in United Kingdom
Get a coupon for ...
5% Offyour next order
when you purchase this product
Exclusions apply. The coupon will be emailed to you.
Redeem on Steam
This game requires a Steam account to play.
Instant delivery
Your purchased keys will be available immediately.*
Officially licensed
All our keys are sourced direct from the game's official publisher.