Rated 'EXCELLENT' Based on 69,189 reviews
14 Day Money Back Guarantee on this product** 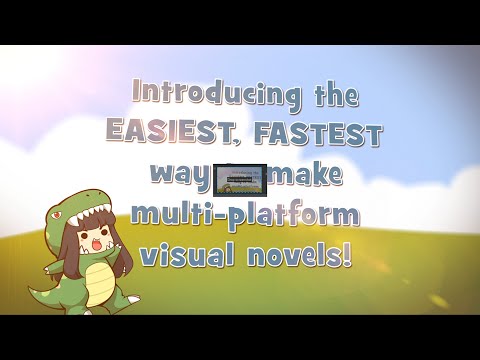 Easily and quickly make your own multi-platform visual novels with TyranoBuilder, even if you know nothing about game programming or scripting!

Bring your creativity to reality with our suite of drag-and-drop tools, plus scripting language for advanced users.

Games made with TyranoBuilder can be easily exported to Windows, Mac, browsers, or converted* for iOS and Android smart devices, then sold via distributors such as Steam, the Apple AppStore, or GooglePlay!

Easy & fast to Use!
No programming knowledge required! Fire up and start creating games immediately with TyranoBuilder’s simple and intuitive drag & drop interface!

Multi-platform!
Create games on Windows or Mac, and export for Windows, iOS*, Android*, smartphones and tablets, or browsers!

Powerful! Flexible!
Customize every aspect of your game with the included TyranoScript scripting language!

Outstanding Value!
Create and sell your own visual novels for only $14.99! Requires NO license fees or royalties of any kind!

"Super intuitive! Within minutes I was up and running and already had a scene nearly finished. The ability to basically do everything without ever needing to know any kind of programming is going to make this a smash hit." - Hardcore Gamer

"This software is amazing, really easy to use." - Nerd Maldito

"Hands down the fastest way of creating a visual novel with no coding required." - Rice Digital

£9.81
£10.99
-11%
Activates in United Kingdom
Get a coupon for ...
5% Offyour next order
when you purchase this product
Exclusions apply. The coupon will be emailed to you.
Redeem on Steam
This game requires a Steam account to play.
Instant delivery
Your purchased keys will be available immediately.*
Officially licensed
All our keys are sourced direct from the game's official publisher.