Rated 'EXCELLENT' Based on 66,866 reviews
14 Day Money Back Guarantee on this product** 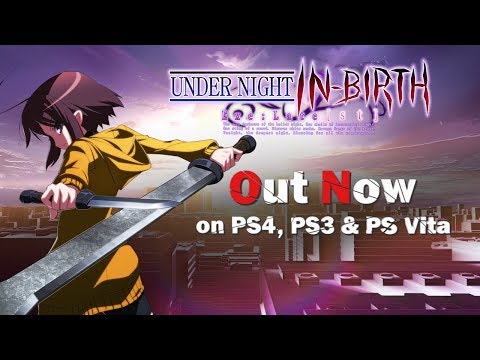 Experience hard-hitting arcade fighting action in a stunning anime visual-novel world with UNDER NIGHT IN-BIRTH Exe:Late[cl-r]. With this Steam PC key, you'll get to pick one of 20 unique characters and fight your way through the dangers of the Hollow Night, and claim your victory over those who would get in your way.

THE HOLLOW KNIGHT
Since time immemorial, the organization “Night Blade” has acted as guardians in what is known as the “Hollow Night”. While resting from her eternal labors in a nondescript town that the Princess of the Night Blade, Linne, meets a young boy named Hyde, who is in possession of the fabled sword of destiny that she has been searching far and wide for.

In the Hollow Night, monsters called Voids feed upon the power that manifests there, while those known as In-births use that same power for their own ends. While investigating the reason behind the sudden increase in the numbers of both Voids and In-births in the Hollow Night, Linne hears of an evil plot being hatched by someone calling themselves “Paradox”. This person turns out to be none other than Hilda, the leader of a shadowy organization known as “Amnesia”.

Vowing to stop “Paradox” before her nefarious plans come to fruition, Linne heads off into the Night. Unbeknownst to her, the young boy she encountered, Hyde, follows behind her with a desperate need to know who, and what, she is.
And thus, the story of the Hollow Night and In-births begins–-

FANTASY LIGHT-NOVEL MEETS STYLISH ACTION FIGHTING
The mystery of the Hollow Night is unfolding before you. At the center lies the Abyss, an unimaginable and uncontrolled phenomenon that threatens all.

Experience intuitive and tight 2D fighter controls, with a splash of devastating combos and unique fighting styles to keep your appetite for battle sated!

NEW SYSTEM: CROSS-CAST VEIL OFF
Activate Veil Off within a combo to send your opponent flying with the shockwave, allowing for follow up extra attacks. During Cross-Cast Veil Off, you will have access to special moves such as Infinite Worth even if your EXS is at 100.

Master the use of Cross-Cast Veil Off to turn the tide of battle in your favor, with the chance to inflict serious damage with your combo!

78
Critic Review Score
(41 Reviews)
Reviews provided by OpenCritic
ZTGD
Drew Leachman
9 / 10
"When it's all said and done Under Night as a whole is a great fighting game."
Wccftech
Dave Aubrey
7.8 / 10
"Under Night In-Birth Late[st] is the complete package for fighting game fans, with the visual novel-like story being the only potential let down for anyone that isn't used to...
TheSixthAxis
Miguel Moran
9 / 10
"I tend to be pretty good at fighting games, but it's rare that any of the ones I play truly click with me. Back in 2015, Under Night on PS3 totally clicked with me. The balance...
Reviews provided by OpenCritic
Redeem on Steam
This game requires a Steam account to play.
Instant delivery
Your purchased keys will be available immediately.*
Officially licensed
All our keys are sourced direct from the game's official publisher.

£30.99
Activates in United Kingdom
Also available in this bundle
UNDER NIGHT IN-BIRTH: Exe-Late [cl-r] - Full Pack
£38.58
Get the following items free with any paid order.
Easter Eggstravaganza Mystery Coupon
FREE
FREE
Redeem on Steam
This game requires a Steam account to play.
Instant delivery
Your purchased keys will be available immediately.*
Officially licensed
All our keys are sourced direct from the game's official publisher.