Rated 'EXCELLENT' Based on 67,735 reviews
14 Day Money Back Guarantee on this product**

War for the Overworld - Ultimate Edition 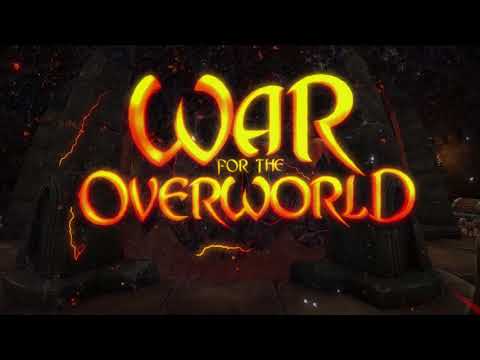 Tired of invading dungeons? It's time you built your own!

Do you feel you’re in a slump, monotonously disembowelling evil guys in endless quests for gold and a slightly better pair of boots? Are you starting to wonder if heroics really are your calling? Then welcome to the War for the Overworld!

Dungeon Management Reincarnated
Excavate and build your dungeon beneath the overworld, in the modern dungeon management game that’s most faithful to the genre’s original DNA. Keep your dungeons, slap your minions, and forge underground fortresses filled with all the dastardly rooms, traps and heinous minions you desire. Do it all under the mentorship of the original and best voice of evil: Richard Ridings!

Wield the Arsenal of Evil
Evil loves options, and within the Veins of Evil there are plenty to go around! Choose from over sixty rooms, spells, potions, rituals, defences and constructs as you progress through the game. Deploy your fiendish tools against the goodly heroes of the overworld, and teach them the price of trespass.

Conquer a Myriad of Modes
With six game modes to choose from you can conquer your enemies in your own unique way. Choose from Campaign, Skirmish, Scenarios, Multiplayer, Survival, and the My Pet Dungeon expansion (free 2-level demo included in the base game), and discover what it truly means to be the bad guy.

Customise, Create, and Share with Your... Enemies
Build your own maps with the intuitive and powerful Map Editor, then share them on the Steam Workshop to join the ranks of nearly 3000 custom maps already created! Meddle further, and change the very rules themselves to your liking with dozens of mutators. Being evil has never been so creative!

Made by Cultists (Fanatics), for Cultists (Fanatics)
War for the Overworld is developed by an independent team of fanatical developers, each with a true love of the dungeon management genre. We have continued to update the game since launch, with countless patches, balancing, polish, and many new features - plus there’s more on the way! Our community has been vital to our success, so please join us, and let your voice be heard!

If you desire the absolute incarnation of evil, then look no further than the Ultimate Edition, which features: base game, Heart of Gold expansion, My Pet Dungeon expansion, The Under Games expansion, Underlord Edition extras (dungeon theme, soundtrack, lore books).

Heart of Gold:
Heart of Gold is the first narrative expansion to War for the Overworld, which puts you in the role of the gold-hungry Underlord Kasita. Under the mentorship of the despicably devious Mendechaus (voiced by Richard Ridings), you’ll sate your thirst for wealth and power in the golden dukedom of Phaestus.

My Pet Dungeon:
My Pet Dungeon is the chilled-out management experience in War for the Overworld - an eight-level campaign voiced by Richard Ridings and focused on exploration and discovery, where the only restriction is your own devilish fancy.

The Under Games:
The Under Games is a seven-level campaign tournament set across a variety of game modes. Choose from new Underlords with unique playstyles, then pit them against the rest in a knockout-style competition organised by the bloodthirsty Mendechaus (Richard Ridings). Can you win The Under Games and lead the charge into the War for the Overworld?

Fanatical about: War for the Overworld - Ultimate Edition

A nostalgic dungeon builder/manager sim, War for the Overworld is an indie real-time strategy game with a twist - you are an Underlord. The perfect game for those who are sick of playing hero, War for the Overworld is the perfect co-op experience.
Redeem on Steam
This game requires a Steam account to play.
Instant delivery
Your purchased keys will be available immediately.*
Officially licensed
All our keys are sourced direct from the game's official publisher.

Franchise:
War for the Overworld

£37.30
£43.51
-14%
Activates in United Kingdom
Spend over £8.00 in a single order to get the following items for free.
May Madness Spin to Win
FREE
View
FREE
Get a coupon for ...
5% Offyour next order
when you purchase this product
Exclusions apply. The coupon will be emailed to you.
Redeem on Steam
This game requires a Steam account to play.
Instant delivery
Your purchased keys will be available immediately.*
Officially licensed
All our keys are sourced direct from the game's official publisher.

Franchise:
War for the Overworld