Rated 'EXCELLENT' Based on 69,901 reviews
14 Day Money Back Guarantee on this product** 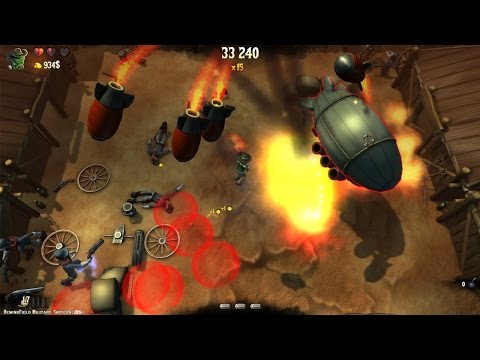 You are a lonesome gunslinger, that will have to get rid of hordes of enemies and defeat spectacular bosses in order to escape to the frontier.

Armed with a rusty six-shooter that you can swap very quickly for new weapons, for a fistfull of dollars looted while playing the game.

Ultra fast single-action revolvers.
Long-range rifles with impressive damage.
Or, if subtlety is not your forte, devastating shotguns : deadly in close quarter combat but leaving you with a very small margin of error.

Fun, nervous and difficult, Wild Frontera offers non stop action, worthy of the best western movies, where every detail is a nod to the spaghetti genre

You'll travel across grasslands, the darkest forests, fields of bones, deserts, a gold mine and towns in order to escape this crazy country and discover why you are now the most wanted bandito in the wild west.

Wild Frontera was submitted on Steam's Greenlight last july and was greenlit by the community in less than 10 days.

The game was made by 2 passionate developers in 12 months.
Redeem on Steam
This game requires a Steam account to play.
Instant delivery
Your purchased keys will be available immediately.*
Officially licensed
All our keys are sourced direct from the game's official publisher.