Rated 'EXCELLENT' Based on 67,353 reviews
14 Day Money Back Guarantee on this product**

Yooka-Laylee and the Impossible Lair 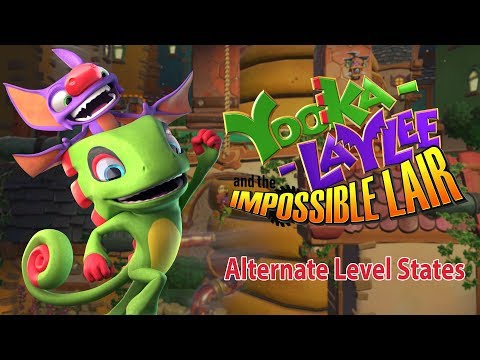 Join heroes Yooka and Laylee as they return for a new platform hybrid adventure in Yooka-Laylee and the Impossible Lair. With this Steam PC key, you'll follow the quirky duo on a new mission to stop arch-nemesis Capital B.

HE'S AT IT AGAIN!
That dastardly villain Capital B is up to no good, his latest evil masterplan is to use a 'Hivemind' device to enslave an entire kingdom of bees. With the help of Queen Phoebee and her Royal Beetallion, you'll lead Yooka and Laylee into CB's 'Impossible Lair' in an attempt to thwart his evil plans.

2.5D IS THE PLACE TO BE
Enjoy a new yet retro perspective in Yooka-Laylee and the Impossible Lair. Unlike the original Yooka-Laylee title, you'll explore 2.5D platform levels - each offering beautiful, rich visuals with detail and depth.

A NEW HUB
Head to the 3D Overworld, another new feature in Yooka-Laylee and the Impossible Lair, which is much more than just a hub to hop from level to level. Explore and unlock more 2D levels by completing objectives and puzzles in the Overworld, rescue the Royal Beetallion bees and find collectibles.

ALTERNATE STATE
Once you've mastered a level, go back and experience again with a range of alternate level states. Flip switches in the Overworld hub to create new landscapes - hook up electricity, submerge them in water, freeze or flip them upside down for radically modified challenges!

KNOW WHEN TO STRIKE (OR STING)
Feel free to tackle Capital B’s Impossible Lair at any time, but be warned as you may find it too much of a challenge without the help of the Royal Beetallion. Help free them by completing levels and add them to your defenses when planning your attack on Capital B’s traps!

YOUR OFFICIAL YOOKA-LAYLEE AND THE IMPOSSIBLE LAIR STEAM PC KEY GIVES YOU:

82
Critic Review Score
(82 Reviews)
Reviews provided by OpenCritic
IGN
David Jagneaux
8.7 / 10
"Yooka-Laylee and the Impossible Lair brings the dynamic duo down to a 2.5D perspective to deliver one of the best platformers we've seen in years."
God is a Geek
Chris White
9.5 / 10
"Yooka-Laylee and the Impossible Lair is one of the best 2D platformers available. If you're looking for something filled with refined gameplay and fun levels, this is it."
Eurogamer
Tom Phillips
Recommended
"Playtonic tightens up its nostalgic take on platforming and turns its eyes to the future."
Reviews provided by OpenCritic
Redeem on Steam
This game requires a Steam account to play.
Instant delivery
Your purchased keys will be available immediately.*
Officially licensed
All our keys are sourced direct from the game's official publisher.

£21.15
£24.99
-15%
Activates in United Kingdom
Get a coupon for ...
5% Offyour next order
when you purchase this product
Exclusions apply. The coupon will be emailed to you.
Redeem on Steam
This game requires a Steam account to play.
Instant delivery
Your purchased keys will be available immediately.*
Officially licensed
All our keys are sourced direct from the game's official publisher.

£15.49
Yooka-Laylee and the Impossible Lair Developed by Playtonic Games. © 2019. Published by Team17. Team17 is a trademark or registered trademarks of Team17 Digital Limited.