Rated 'EXCELLENT' Based on 69,031 reviews
14 Day Money Back Guarantee on this product** 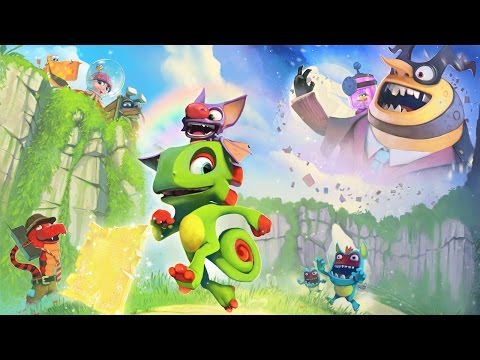 Yooka-Laylee Digital Deluxe is the ultimate platforming package, including an exclusive digital manual and art book, plus the game's incredible soundtrack!

Yooka-Laylee’s 24-page digital manual and art book features exclusive details on the characters, worlds and challenges set to feature in the highly-anticipated platformer revival! Oh, and there are a few excellent puns in there too, if you’re interested.

The digital artbook includes never-before-seen concept art and in-development images offering an insight into the creation of the game. Marvel at the post-it note origins of serpent salesman Trowzer! Say ‘wow’ as you discover that Dr. Quack used to ride a tank! A must-have for fans.

Yooka-Laylee is an all-new open-world platformer from genre veterans Playtonic!

Explore huge, beautiful worlds, meet (and beat) an unforgettable cast of characters and horde a vault-load of shiny collectibles as buddy-duo Yooka (the green one) and Laylee (the wisecracking bat with the big nose) embark on an epic adventure to thwart corporate creep Capital B and his devious scheme to absorb all the world’s books… and convert them into pure profit!

Using their arsenal of special moves, our heroes will tackle a huge variety of puzzles and platforming challenges in their search for Pagies, the golden bounty used to unlock — and expand — stunning new worlds, each jammed to the gills with oddball characters, hulking bosses, minecart challenges, arcade games, quiz shows, multiplayer games… and much more!

INTRODUCING OUR NEW BUDDY DUO: Yooka and Laylee boast an awesome arsenal of abilities built for platforming fun and unlocked with added freedom from the serpent salesman Trowzer.

CARVE YOUR OWN PATH: Purchase and unlock moves with freedom, choose to expand your favourite worlds into even larger, more complex playgrounds and equip unique Tonic gameplay modifiers to customise your play style. Every player will have a unique experience.

A COLLECT-EM-UP FOR THE MODERN ERA: Seek out a roster of shiny collectibles with gameplay progression at their core (as well as other, more valuable materials), such as the dual action Butterfly Energy or tricky Ghost Writers!

A CAST TO LAST: Meet (or beat) a huge cast of memorable characters brought to life by the art and audio teams behind legendary platform games, and destined to endure in future adventures as part of Playtonic Universe. Expect all manner of grunts, squeaks and squawks.

A DREAM SOUNDTRACK: David Wise (Donkey Kong Country) and Grant Kirkhope (Banjo-Kazooie) combine for a melodic masterpiece! Seriously, clean out your ears – they’re in for a treat.

BUDDY UP: Establish your own buddy-duo and adventure through Yooka-Laylee in co-op mode! Taking control of a unique co-op character, a second player can assist Yooka and Laylee by stunning enemies and helping them tackle tricky challenges. No piggyback required.

£8.59
£42.99
-80%
Activates in United Kingdom
Get a coupon for ...
5% Offyour next order
when you purchase this product
Exclusions apply. The coupon will be emailed to you.
Redeem on Steam
This game requires a Steam account to play.
Instant delivery
Your purchased keys will be available immediately.*
Officially licensed
All our keys are sourced direct from the game's official publisher.

All other trademarks, copyrights and logos are property of their respective owners.